From Slave to Supervisor

Thousands of children have been rescued from slavery thanks to the work of Set Free’s pastor partners. The ultimate goal for each rescued child is to reunite them with their families. But in some cases, this is simply not possible. For these children, they are cared for, trained, and equipped for a career to be able to provide for themselves and their future families. One of these possible careers is tailoring, and the #CrowdsourcingKids elephant sales allows Set Free to provide training opportunities to practice their sewing. Once a slave, their hands now create beautiful elephants. Here is one of their stories. 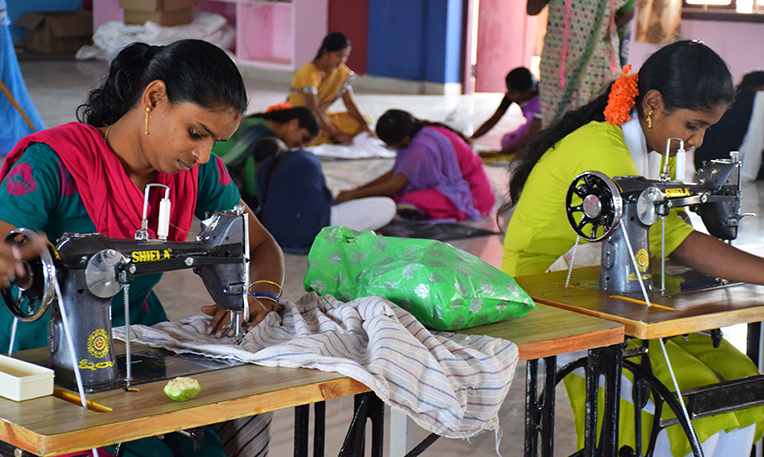 Shakti grew up with her mother, father, three brothers, grandmother and grandfather all living together in their home. Shakti’s parents were both illiterate and uneducated about family planning benefits through the local public health center leading to the large size of Shakti’s family. Both Shakti’s mother and father did manual labor in the agricultural fields to make ends meet for their large family. Often, Shakti’s grandparents would fall ill, and Shakti’s parents had to spend much of their money on medication. The public health center in Shakti’s village was not of much benefit to impoverished families like hers. Doctors within the public health center would advised Shakti’s parents to purchase medication outside of the center; because it lacked sufficient stock, and families like Shakti’s were not a priority. Consequently, the majority of Shakti’s parent’s funds went towards medication, leaving them unable to sustain themselves and their children.

One day, Shakti’s grandmother fell very ill. She was diagnosed with diabetes and was prescribed insulin injections every day. With no other option, Shakti’s parents took out loans that they feared they would never be able to pay back. There seemed to be no way for Shakti’s parents to sufficiently care for their parents or their children. Being uneducated, work was limited, and sickness loomed around every corner. Amidst their helplessness, Shakti’s uncle suggested to her parents that Shakti and her brothers be sent to the quarry mine to earn wages and pay off the family debt. Although Shakti’s uncle knew the horrendous truths about the quarry mine, he told the same common lies to Shakti’s parents; that the quarry mine would treat the children well and pay the children a monthly salary to be sent home, in addition to the initial payment in exchange for the children.

The next day, a quarry mine agent paid Shakti’s family a visit. Many years later, Shakti found out that it was her uncle that personally sent the agent to collect her and her brothers. The agent offered Shakti’s parents Rs.5000 (roughly 70 U.S dollars), per child. The agent proceeded to promise the family monthly salaries, quality living and food for the children. These details led Shakti’s parents to agree to the trade. Shakti tells that it was, “dire financial need, gullibility, and helplessness that forced three of us children into the mine.” As Shakti and two of her brothers were taken away, her parents cried desperately willing themselves to release their grips on the children. Shakti was 11, her brothers 7 and 9 when they were forced to confront horrendous, torturous conditions and experiences.

Life as a Slave

Immediately, Shakti was separated from her brothers. While traveling in a van with no windows, she tried to ask the agents where her brothers were taken; only to be hit in return. After several hours of traveling, Shakti and other children arrived in the stone quarry mine. They were greeted by malnourished, children and adults hard at work in torn clothing. Shakti was immediately put to work, from dawn to dusk each day. She was given only one meal in the mornings, and a set allotment of 2 liters of water a day. Each night Shakti was kept awake by her stomach cramps; yearning for food. Shakti slept on the hard ground among the other works. Snakes and other creatures often slithered around her, making it impossible to sleep.

Only four days after Shakti’s arrival, she was summoned by the agents to learn to break up rocks; a job for a person much older than 11. Struggling to lift the hammer and control its motion, Shakti hit her own thumb. After calling out in pain, an agent approached her and began cursing and hitting her with his cane as punishment for make a mistake that hindered her work ethic. Shakti was forced to endure her conditions, understanding that her only other option was to die. This hopelessness was deepened for Shakti about a month after her arrival when she bore witness to four 15-year-old boys being beaten to death for attempting to escape the night before. In the mine, it was a set punishment that if one is caught trying to escape they will be publicly beaten to death. After witnessing this, Shakti became physically ill but pressed on with her work.

As time marched on, Shakti was forced to experience unimaginable sexual violence at the hands of her captors. This violence began two months after arriving in the mine and continued every day until Shakti was rescued. Upon the first sexual attack, three fellow mine workers told Shakti that they were to go to the agent’s room to sweep and mop. After finishing that work, the three women told Shakti that they all should take advantage of the bathing room and take baths. Shakti was hesitant, but they forced her to comply. After the women were done bathing, the agents appeared in the room. The three women exchanged looks with the men and left Shakti alone with them. Shakti then realized the trap she was in. The men sexually abused Shakti until she was nearing unconsciousness. The men told Shakti that she was to come to them each time they asked; if she did not she would be killed. Shakti was hopeless. She felt that there was no point to living anymore and cried out to God to put an end to her misery. Following the attacks, the women that trapped Shakti told her with heavy hearts that if they had not done what they were told, they would also have been killed.

After two years of bearing this misery, Shakti’s prayers were answered through Set Free’s partner pastors. On December 20th, 2011, a team of partner pastors entered the cave in the middle of the night. This night was a good opportunity for the team to put their mission into action because the village was having a celebration that night to worship different deities. The agents in the mine would be preoccupied, giving the pastors a chance to rescue the children. Additionally, the team of pastors sent one of their own, undercover into the mine four days before, to tell the children about their intended rescue. As the rescue was underway, one partner pastor, Aarav was discovered by a mine agent who tackled him. With the help of a fellow pastor, Aarav was able to escape the mine agent, who then began to hurdle stones at the men as they led the children out of the mine. Aarav was hit by a stone that injured his leg but escaped successfully with his team and 55 children. These partner pastors risked their lives to bring children to safety, and just a few days before Jesus’ birth, these 55 children became free of slavery’s hopeless shackles.

Children like Shakti, who could not be relocated with their parents, started their new lives in church homes set up by Set Free’s partner pastors. Here, the children are nursed back to physical and emotional health. Doctor care and counseling were provided to help the children recover. Once the children are healthy and rested, they are encouraged to continue their education. For Shakti, Aarav helped her take a course in fashion design. Through this, she was able to attend the Vocational Training Institute the following year. With this training program, Shakti landed a job in Bengaluru with a salary of Rs. 11500 (roughly $164). Upon leaving for her new job, Shakti fell on the feet of Aarav weeping in gratitude.

In 2017, while Shakti was working as team manager of the fashion company in Bengaluru, she received a call from the partner pastors telling her that her brothers had been rescued. Shakti took a week of leave to stay with her brothers and encourage them to follow the advice of Aarav and to work hard. They are currently living in a church home under the care of Aarav.

Shakti is now working as the head of the design department at a fashion company in Mumbai. She now makes a salary of Rs. 60000 (roughly $859) and sends Rs. 10000 (roughly $143) back to support her brothers and to fund other rescue missions to save more children just like herself from labor slavery.

Through the trials Shakti experienced, she has come to believe that she suffered to discover faith. Shakti remarks, “if God would not have had me be sent to the mine, I never would have had the opportunity to meet Aarav, who has transformed my life to unimaginable heights. I and my brothers owe our lives to Aarav for his compassion.”

Consider joining us in pressing forward this mission to save children from the evil of labor slavery. Help these children experience the faith, gratitude, and hope that Shakti has found. You can make a difference!